Analyse the Behaviour of Particles with the Particle Tracing Module

Extend the Functionality of the COMSOL Environment with Particle Tracing

The Particle Tracing Module extends the functionality of the COMSOL environment for computing the trajectory of particles in a fluid or electromagnetic field, including particle-particle, fluid-particle, and particle-field interactions. You can seamlessly combine any application-specific module with the Particle Tracing Module for computing the fields that drive particle motion. Particles can have mass or be mass-less. The movement is governed by either the Newtonian, Lagrangian, or Hamiltonian formulations from classical mechanics. Boundary conditions can be imposed on the particles on the walls of the geometry to allow particles to freeze, stick, bounce, disappear, or reflect diffusely. User-defined wall conditions may also be specified, where the post collision particle velocity is typically a function of the incoming particle velocity and the wall normal vector. Secondary particles released when an incoming particle strikes a wall can be included. The number of secondary particles and their velocity distribution function can be functions of the primary particle velocity and the wall geometry. Particles can also stick to the wall according to an arbitrary expression or a sticking probability. Additional dependent variables can be added to the model which allows you to compute quantities like particle mass, temperature, or spin.

Particles can be released on boundaries and domains uniformly, according to the underlying mesh, as defined by a grid or according to an arbitrary expression. A wide range of predefined forces is available to describe specifically how the particles interact with the fields. You can then add arbitrary forces as defined by a suitable expression. It is also possible to model the two-way interaction between the particles and the fields (particle-field interaction), as well as the interaction of particles between each other (particle-particle interaction).

Particles are injected from a system of injection nozzles into a CVD chamber with a cone angle of 15 degrees. Initially they have enough inertia to follow their original trajectory but ultimately the drag force takes over and the particles begin to follow the background gas out of the exhaust port. 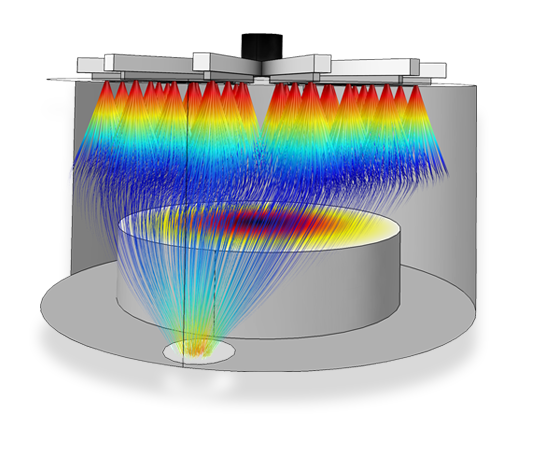 For each particle, an ordinary differential equation is solved for each component of the position vector. This means that three ordinary differential equations are solved for each particle in 3D, and two in 2D. At each time step, the forces acting on each particle are queried from the computed fields at the current particle position. If particle-particle interaction forces are included in the model, they are added to the total force. The particle position is then updated, and the process repeats until the specified end time for the simulation is reached. Since the Particle Tracing Module uses a very general formulation for computing particle trajectories, the Particle Tracing interfaces can be used to model charged particle motion in electromagnetic fields, large scale planetary and galactic movement, and particle motion in laminar, turbulent, and two-phase fluid systems. 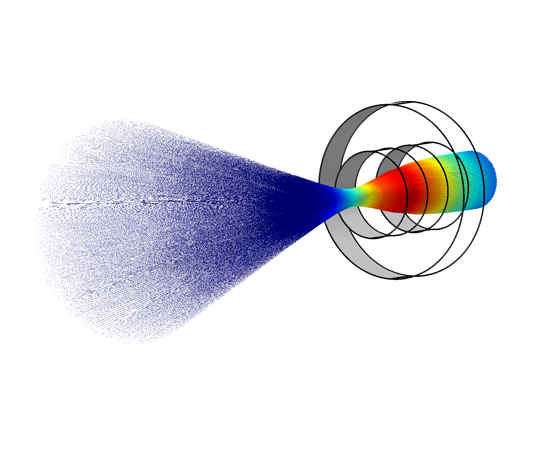 Charged particles, such as electrons, individual ions, or small ion clusters, are affected by three primary forces in electric and magnetic fields:

Studying Particle Tracking in a Fluid

In a sparse flow, the continuous phase affects the motion of the particles, but not vice versa. This is often referred to as “one-way coupling”. When modelling such a system, it is usually most efficient to solve for the continuous phase first, then to compute the trajectories of the dispersed phases. 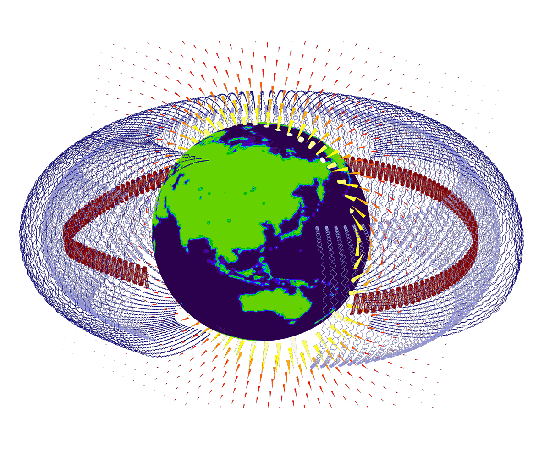